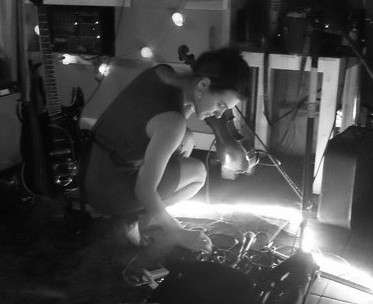 Beautiful…Girls in Trouble puts a fresh twist on ancient stories, as well as folk music in general.—Popmatters

Girls in Trouble is an indie-folk song cycle about the complicated lives of women in Torah by award-winning poet, singer, songwriter and violinist Alicia Jo Rabins. With this project, Rabins mines the complex and fascinating stories of Biblical women, exploring the hidden places where their lives overlap with her own.

Originally begun as Rabins’ thesis for a Masters in Jewish Women’s Studies at the Jewish Theological Seminary in New York, the project draws on Rabins’ background as a classically trained violinist and poet, as well as her diverse influences: orchestral indie-rock, feminist spirituality, Appalachian ballads, and a deep devotion to studying and teaching ancient Jewish texts.

As a band, Girls in Trouble has released three full-length albums of songs about Biblical women: Girls in Trouble, Half You Half Me, and Open the Ground. The New York Times praises Rabins’ “gorgeous voice,” NBC.com lauds the band’s “melodic, spare gorgeousness.”

The Girls in Trouble Curriculum is a series of study guides about women in Torah through songs and other artistic representations, generously supported by the Covenant Foundation. Twenty-four study guides are available; 11 “standard” and 13 “extended” with visual art. These study guides can be explored in the classroom with teens and adults (some can also be adapted for younger learners), discussed together with a group of friends, or enjoyed on your own with a cup of tea!

Rabins has used her scholar’s head and poet’s heart to give personality to the long‐buried women of her songs. Their tales are extraordinary, yes, but they resonate down the millennia when told by such a consummate storyteller. –Wearsthetrousers.com

“The Girls in Trouble Curriculum is an invaluable resource for teaching midrash in a way that is engaging, authentic, and creative. I’ve personally used it to enhance my classes as well as my own study of Biblical women.”
Rabbi Shoshana Gelfand, London